Nubile Projectile vs The Penetrator 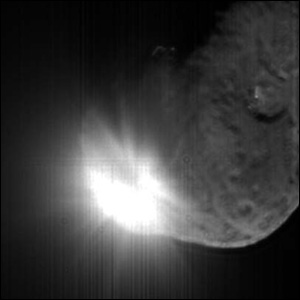 At last our knowledge of comets is more than skin deep. In a split seconds the Penetrator blasted off the Nubile Projectile's clothes, revealing what space weathering had obscured. She ain't pretty (but a billion years will do that to a gal), but now we know a bit more about her history than we could learn by passively watching a telescope... I wonder about the little jet on the right of the first picture - secondary explosion or a previously existing jet? A photographic artifact? Still the point to doing more! impactor based missions is that, as scientists put it:

we still do not understand the physics of space weathering well enough to [italics mine]confidently assay mineralogy of diverse asteroids by remote-sensing...

To find out more all we have to do is exert the same amount of force as over 6700 horses could exert over the course of an hour.

For the last decade it's been "fear the stranger, hate the stranger" - now some think we're at "kill the stranger" stage - but to me, this little bump in the sky at 23000 mph was filled with love. No-one was hurt in this smashup that didn't know what they were getting into...

Of course, the ultimate collision didn't quite live up to artistic expectations, but it did turn out that Tempel 1 was a great deal more firm than previously believed. If it weren't for their long periods, comets may turn out to be a great place for men to live.

Some wonder if Deep Impact has
anti-ballistic missile applications? Of course it does. Clementine-2 - the first designed impactor mission - was canceled in '93 because of it's association with SDI.

The problem is: hitting objects at long distances is a useful skill to have - whether you're a baseball player, or a nation worried about national defense, or a frustrated engineer that wants to know - quickly and cheaply - just what M and S class asteroids are made of. Still my favorite twinned body is Toutatis, shown here, passing by only a few lunar distances away last september.

I'm not the only one reaching for sexual analogies - the new scotsman calls this The big prang theory...

Resume,Songs, My new blog, NeX-6, My facebook page
Orgs I like
The EFF - keeping free speech in the world
Musical stuff I like
Jeff, Rick, Ardour, Jack
Prior Rants - the Nubile Projectile gets no respect Space cynic Space Impacts as Sport Justice for Souter? talking to myself Goodbye, Edirol and Roland - Part 1 It's the architecture... perhaps 64 bits Reality distortion field (Un)usability
Best of the blog:
Uncle Bill's Helicopter - A speech I gave to ITT Tech - Chicken soup for engineers
Beating the Brand - A pathological exploration of how branding makes it hard to think straight
Inside the Internet Mind - trying to map the weather within the global supercomputer that consists of humans and google
Sex In Politics - If politicians spent more time pounding the flesh rather than pressing it, it would be a better world
Getting resources from space - An alternative to blowing money on mars using NEAs.
On the Columbia - Why I care about space
Authors I like:
Doc Searls
Where's Cherie?
UrbanAgora
Jerry Pournelle
The Cubic Dog
Evan Hunt
The Bay Area is talking
Brizzled
Zimnoiac Emanations
Eric Raymond
Unlocking The Air
Bob Mage
BroadBand & Me
SpaceCraft
Selenian Boondocks
My Pencil
Transterrestial Musings
Bear Waller Hollar
Callahans