I'm going to write more here about the Paulson bank bailout but I need to take a long walk, first, to calm down. Peonage awaits.

Sumday Update: A lot of things went through my head, but the 1300 people commenting on the proposed act covered all that and more, with considerably more venom. Go read that, not me.

Oh, I did write a few choice phrases like:

Bin Laden must be laughing in his cave...

And noted some great quotes from that post above:

I believe that banking institutions are more dangerous to our liberties than standing armies. If the American people ever allow private banks to control the issue of their currency, first by inflation, then by deflation, the banks and corporations that will grow up around [the banks] will deprive the people of all property until their children wake-up homeless on the continent their fathers conquered. The issuing power should be taken from the banks and restored to the people, to whom it properly belongs. - Thomas Jefferson, Letter to the Secretary of the Treasury Albert Gallatin (1802)

and had a long talk with a friend about it all...

Eric Raymond is back, and blogging with the best of them - taking on the collapse of the entitlement system, admiring the yippie elements of Palinomania, tackling identity politics and describing the the vanishing consumption gap. I found that last article there, quite interesting, in light of the economic statistics I believe in.

Two interesting bits on obesity and antibiotics: Why on earth does the US subsidize corn syrup?

The economist has a great article on the issues with obliterating Helicobacter pylori from the human stomach.

Pity poor Helicobacter - a casualty of the war against common aliments. 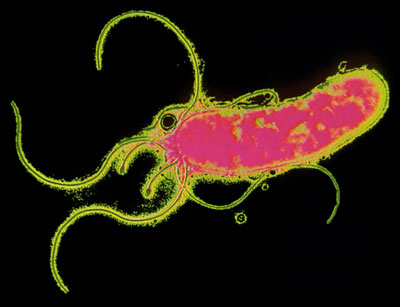 I've always tried to avoid being pumped full of whatever magic antibiotic is trendy (or rather, after having been pumped full of various trendy drugs multiple times in the past, prefer to avoid them in the future). The problem with antibiotics is that they are, well, anti-biotic - they kill a lot of innocent bystander micro-organisms in addition to what's targeted. Also some of the side-effects of modern antibiotics like levofloxicin are scary as hell.

(I prefer to struggle through the flu and dysentery without chemical aid, anything non-life threatening, actually. This strategy has a flaw in that I don't have a GP, and for all I know am about collapse from some easily preventable disease or cancer. I get by on wikipedia. At least I live in a country where most drugs are available without prescription and requisite middlemen)

Down here in San Juan Del Sur, the wind has been consistently onshore and the surf correspondingly terrible. This week, starting Tuesday, looks great, though. It's too bad I have to work. I had basically planned to bust my hump during the slack/rainy season (Sept-November) so I could take off for the rest of the year. September is nearly over... Mmmm... magicseaweed predicts 6+ foot waves... maybe I'll take off Wednesday and Thursday... I gotta keep my weight down....

I got a chance to do some art this weekend, after doing a photo shoot with a local model and photographer. My goal was to produce a series of sexy line cards and posters for promoting the open mic nights at Coquito. I think I like this one the best, although it's not bright enough for the intended purpose, maybe it would work as a cd cover. Now I just need some music to go with it (two of the regular musicians are leaving town this week), and maybe another shoot....

Saturday was the start of a 4 day holiday here, celebrating Nicaragua's independence from Spain (Costa Rica, Guatemala, El Salvador, Honduras all have the same holiday, for the same reason). The town filled up with cars from Managuans, stereos blared from every street corner, multiple discos rocked out, gorgeous girls wandered around hawking Pall Malls, there was a parade seemingly every other hour, and never has so much been drunk by so many, so early. There were loud, drunk, happy people passing by my door all day and night long. It's 7AM, and they are still passing by....

Good magazine has a good human interest story on the decline of fishing since 1988....

And lastly, CERN now has a live webcam on the large hadron collider! It's pretty neat that with all that advanced technology for safely making mini-black holes and odd particles, that they've also let the public watch the thing in action.

ah, well, back to work... might as well get some done in the time we have left.