I'll play anywhere, even the floor

James (the guy on the stool with the Zepata guitar) did this killer intro to a song that the rest of the people on the stand should have known immediately, and they just stared at him. He stared back in disbelief for what seemed like forever. I slid in - safe! - as he kicked into Redemption Song...

Old Pirates, yes, they rob I.
Sold I to the merchant ships
minutes after they took I from the bottomless pit.
But my hand was made strong
By the hand of the Almighty.
We forward in this generation triumphantly.

... And, then, everybody knew the words.

Emancipate yourselves from mental slavery,
None but ourselves can free our minds.
Have no fear for atomic energy,
'Cause none of them can stop the time.
How long shall they kill our prophets
While we stand aside and look?
Yes, some say it's just a part of it.
We've got to fulfill the book.
Won't you help to sing these songs of freedom?
'Cause all I ever had, redemption songs,
These songs of freedom, songs of freedom.

I've been too mad to write lately.

Don't get me started on the "energy debate" that Obama and McCain had. It lasted about 2 weeks, as best as I recall, and fizzled out as the price of oil dropped below $109.99. Both parties agreed to spend money on other sources. Yea! All I wanted was someone with a flip chart showing 3.5TW of power in use in the USA, and a 2% growth rate, and a picture showing what percentage of that would come from what energy source by 2030.

All I wanted was just that one chart, that one graphic, that actually turned those two weeks of atonal political heat into air conditioned offices with great chairs for the rest of my life.

Also, for the last month I was asking: "Who will be the next Dick Cheney?".

Answer Numero Uno: Joe Biden. I'd go into the long tainted list here, but this is the guy that helped rewrite bankruptcy law long before the current crisis, ensuring that your pain would be more prolonged and severe. 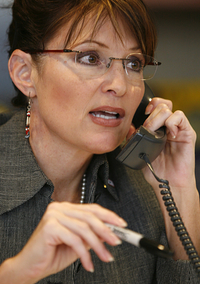 Answer Numero Dos: Sarah Palin. She bears an uncanny resemblance to the character of Laura Roslin on Battlestar Galactica. I'd go into a list of where their qualifications, experience, and personal growth are similar.... but I'll wait for some other fanperson to write that up.

The Republicans think they have captured the SF channel vote.

The USA's issues in space are more severe than on that show. Technical issues (someone may have left a vacuum cleaner in the tank) and the latest hurricane, have disabled both of the space shuttles on the pad, and the problems in Georgia may deny the US manned access to space by 2010.

The show only goes to season 4 and I want to know: what happens to the people in the prison ships?

A season 1 Roslin might be sweet and tough, but a season 4 Roslin might say, Import some experts from across the Bering strait and bring back the gulag!! There's 600+ thousand potential jobs in Alaska if opened to major drilling. Forget freedom and space. Go North, young man! A life on a rig awaits you in the cold and -40 degree weather in the land of the midnight sun. Maybe we'll build a settlement for you with casinos, hard drugs, cheap beer, and easy women, just like Alberta...

I got a good belly laugh from this Alabama joke:

"Guns are sold out throughout Alabama this week. Said one native: "We aren't gonna get caught with our pants down by dem Russkies, like Georgia."

I note that it is not politically correct to make fun of Alabamians or members of any other state that is heavily armed. But for the most part, Alabama is a "military" state, so it's assumed that the guard will take care of them... Oh, wait, their guard is in Iraq.

The "Red Menace" has been reversed. It's now Russia recognizing independence and the US barring it. It would be kind of interesting if Alabama's gun sales had spiked.

I found the button I plan to wear this season:

The last shuttle out of the US is scheduled for 2010.