Pregnancy and birth in space

Every so often I get on a google-driven research track that's interesting.

I got asked, recently, "what are the prospects for pregnancy and childbirth in a zero-g/microgravity environment"?

That intrigued me. So I googled. The answers were surprising.

We don't know. In the 43 years since we've entered space not one experiment has attempted to go from impregnation of a mammalian species to birth, and beyond, in space.

The preliminary results are intriguing, however. Impregnation didn't work... The closest thing to a comprehensive exploration of the subject notes:
... male and female rats were allowed to mate in space. No pregnancies resulted, but post-flight laparotomy showed that the ovulation and fertilization did occur in the rats, though for some reason embryogenesis did not proceed in the normal way. Later, the same rats were mated with nonflight rats and all the litters were found to be normal.

Offspring of flight dams appeared to have impaired auditory detection capability and possibly vestibular supersensitivity. Other perturbations in development caused by the space environment may have been compensated during the five days between biosatellite recovery and birth.

Our findings indicate that, with the exception of labor contractions, mammalian pregnancy and parturition remain qualitatively and quantitatively intact after spaceflight during pregnancy.

And as for humans...

A 26-year-old ex-factory worker named Valentina Tereshkova was the first woman in space. On 16 June 1963 she piloted the Vostok 6 mission which lasted 70 hrs 50 min.. Later that year in the month of November she married Cosmonaut Andrian Nikolayev, the pilot of the 94hr 22min Vostok 3 mission. A year later Cosmonaut Valentina Tereshkova gave birth to a healthy baby girl [...] Margaret Rhea Seddon (who first flew on the SLS-1 mission) [...] conceived and gave birth to a healthy baby after being in space, which suggests that short duration space missions apparently cause no permanent harmful effects to the reproductive system in human beings.

Why, then, with long duration missions for humans of over 400 days, have we not fully investigated the complete 22 day gestation and birth cycle of rats? Beats me - but the Australians plan to find out more in 2005.   ¶ 8:15 PM 0 comments

Well, no, but he must have had a cup of coffee before this debate, unlike the last one.... Maybe his animatronics pack was working this time. I'm glad to see the state of robotics technology has advanced so far, otherwise: bemused at the uses of it.

I've discovered recently there are a couple billionaires I like - but I'm not fond of those in the 'Neremiah Scudder' a.k.a. "Bush" administration. 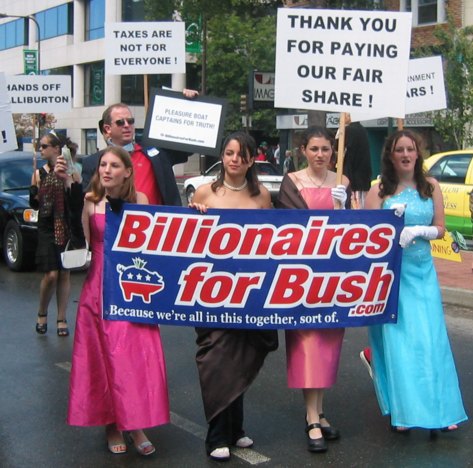 What candidate I vote for, in california, doesn't matter, (the state going democratic is a forgone conclusion). Florida, on the other hand, is anybody's guess. My parents are driving down there this week to weigh in.

I don't have a lot of criteria left for a presidential candidate's requirements - ideally he/she should have a clue about space, technology, and science - and be more into blow jobs than blowing up things.

My personal preference for president? Dilbert. The poor guy hasn't had sex since he appeared on the comic pages, and could use a compassionate intern to ease his frustrated creativity.

Kerry doesn't give a flying hoot about space according to this article. I'd agree - 'cept that the post uses "voting against the space station" as one criterion for "being against space". 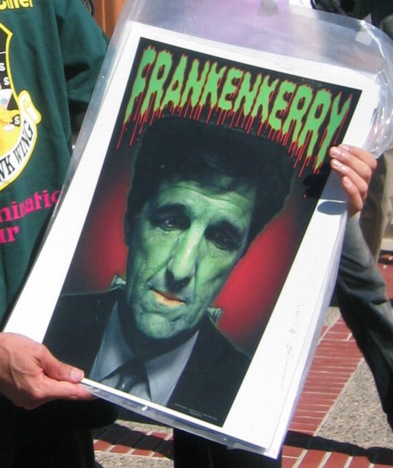 I TOO would have voted against the "International Sucking Sound" - the International Space Station - in favor of something more rational - like a few hundred asteroid missions. Elsewhere, Kerry's called NASA a valuable jobs program, and I have trouble stomaching that.

So I look at the polls to see if I should stock up on desert outerwear or tax accountants... and don't know which to believe. It's a tight race. That's exciting in itself - but far more exciting than what either candidate is saying. Perhaps this election will be decided by the graveyard vote, or an enterprising hacker (republican or democrat) that understands how SQL works....

the graphic at left (courtesy maotig) is the only poll I've seen that has Kerry ahead. So, if you are a voter swayed by polls, check that one out.

Damn it. I'm going to hate to see Neremiah Scudder get re-elected. We're now a country where the primary third party candidates for president get arrested on debate night. At least they were treated decently, and not beheaded - this time.

I wonder about some things - last election, the elimination of the inheritance tax was a big issue - where is it now? I'd like to see it restored (revised, and updated) - as it was one of the few things slowing down the establishment of a hereditary aristocracy in America. 70b a year in lost taxes - a dead issue? Hmmm...

I lose self-control once and get ravenged by the marketers

I usually have my ad-busting filters on, but one from www.emarketresearchgroup.com got through this morning.

"Fill out all these forms and get a free laptop!"

And I was tempted. Tempted... I lost control - I started clicking on things - I went through form after form after form. God only knows what I'm signing up for. I'm probably invalidating my donotcall.gov registry and signing away rights to tattoo my first born child with the logo of some desparate soda company...

Are you over 21 and a smoker? "You can win a free plasma TV"

I got a kick out of that survey - I smoke a tobacco pipe - and no-where was there any sign of my tobacco (Supervalue Black Cavendish)- somehow in the past 50 years "smoking" became shorthand for "smoking cigarettes". How did cigarettes ever get so popular? I hate the things. They smell bad, they taste bad - must have been WWII when they were part of the military ration - what a marketing bonanza that must have been for the cigarette companies. The terms and conditions of this contest are a real eye opener.

Ah, well, winter is approaching, and much fourth class mail burns well in my woodstove - bring it on! Fill my mailbox with useless junk you bastards! Keep me warm this winter!

There's no turning back now....

In rapid succession I say: I don't want any more mortgage solicitation ads (I get enough thank you, and nobody in their right mind would refi my house), refuse to register for the menthol smoker prize ($2500!), I don't have a federal student loan so I don't want to cut that by 58%, I don't need a hot new wireless samsung phone, nor do I want to sign up with BMG's music service, because I don't listen to any of their music, sure I'd like a master's degree but I'd rather finish up my BS first...

hmm, a poetry contest - up to 58k in cash prizes - nahhh... I just want that free laptop - I could use to eliminate my debt, too - but not this way - naaahhh, nor do I want a new auto loan - I'm not single, don't want to meet anyone... I don't want to win a free trip to orlando,either... don't want to get another degree from another competing provider, nor do I want to refinance my home via another provider...

I may end up with more burnable 4th class mail than I bargained for!

I keep clicking and clicking - I think, all in one go, I've filled my "susceptable to advertising" total for the year - they've got me by the short hairs - I've got to revise Beating the brand for all this crap -

Yea - Fix Belly fat!, get a new house loan (again!) Best price on a new car. get a degree from someone else (oh, my mouse hand is hurting!)... and then it gets worse - pages of clicking on a dozen "no" checkboxes - and finally - the requirement for the laptop is that I have to sign up for one of three pages worth of services...

and :whew: something I actually want - a netflix subscription - so I can rent ad-free movies all winter...

'cause I'm turning off cable tv and turning my banner ad filters back on - RIGHT NOW.

I then have to kill a dozen pop-under ads - my god, is this the internet that people without Privoxy have to deal with? Yuck.

Any sufficiently advanced technology will not become popular until it can be used for sex.

I used to joke about the possibilities of advanced tele-dildonics... and now it's here. It's a rather graphic example of the potential of peer to peer networking falling into the hands of the general public!

I anticipate many a stocking stuffer for distantly seperated couples.

And once the general public gains an understanding of how tele-operation really can work for them, who knows what will happen next?