Think about the thousands of people that produced the dynamic space program of the early 60s: about all the work, all the memos and all that data and design calculations that are lost to the sands of time now, aside from what little is in the official histories and personal biographies.

NASA should adopt more open source methods. Certainly, publishing on the web EVERY single paper study that they have ever paid for - starting now, but going all the way back to the 50s - would be a huge boon for the public, the engineering, and the science communities, that all want one thing - to be in space - a lot - and cheaply.

Also, publishing on the Net all the source code that controls the rockets would ensure, via Linus's law, that fewer semicolons - and targets - would be missed.

I can't think of a single SF writer who thought that the plan for humans exploring the solar system would look like this:

A lot of the hard specs are out there on sites like astronautix.com, but when I look at the pictures on the web of the foot thick briefing books for Apollo, I yearn for a closer look.

Starting from the top of the Shuttle replacement's design - I like the return to a capsule. It works. The escape modes are appealing. It can't manuever worth a damn, but who cares.

Yet Europe and Russia are now touting a lifting body based design, called Kliper, which kind of blows my mind. I don't want to think about it. The Russian/Europeans seem to really have some grand plans for spaceflight. Ours is now the more mundane program. OK. I am convinced the current plans for the stick and the heavy lifter will work better than the shuttle ever has - but are the right choices being made?

Michael Griffin outclasses me by 7 degrees, but I can't help but question things like the choice of the 25 year old space shuttle main engines (SSME) for "the stick", rather than the less expensive, 80% lower part count, higher thrust (2.8 MN vs the SSME 1.8MN) RS-68.

Admittedly, as best as I can tell, both the SSME and the RS-68 are being considered for the second stage of the stick, and the RS-68 has had some teething problems.

Secondly, I like the use of a solid first stage but question the use of the existing shuttle part - I've never liked segmented solids and a rocket cast in one piece and floated to Canaveral makes more sense to me. 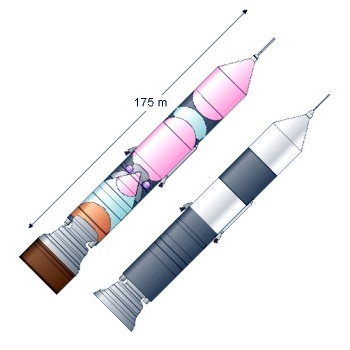 It bugs me, a lot, that the Shuttle SRBs are the width they are because that's the maximum width a railroad car could take. Why didn't we build the solid rocket boosters in central florida? Politics.

The extra segment for the heavy lifter seems like a big risk.

That said, the existing SRBs do already have a manufacturing base, and it costs money to change that.

Thirdly, I wish that NASA had published the technical data and financial analysis behind the choice of developing a new man rated vehicle, rather than man rating something like the Delta V Heavy and closing more of the shuttle production lines.

Proponents of reusables tend to forget - one good way to reduce costs and lower risk over the cost of the program is to manufacture a lot and fly a lot, making incremental improvements. That's why I'm leary of the heavy lifter and the 2 launches per year model. Our heavy lifter program, as proposed, already looks like the B2 bomber program as it ended up.

And, if you're going to build a heavy lifter, why not build a REALLY HEAVY LIFTER? I'd like to see, from internal memos, etc, why a design like Sea Dragon isn't feasible.

Still, looking at the two new designs, it's like some politician was given a bunch of parts and asked to re-assemble them without putting anyone on the unemployment line. All that said, it's all back seat carping for now, and damnit, probably, by reusing so many shuttle parts and production lines for both new designs, NASA really is saving time and money.

I'm no longer an advocate for SSTO, reusable vehicles. The staging approach gets the mostest there, fastest - but what are the operational costs beyond that first moon landing using the stick and heavy lifter? No one knows.

If it were up to me I'd outsource the manned program to the Russians and focus on building the heavy using tried and true Saturn V techniques. I'd also seriously think about just putting payloads on existing rockets wherever possible - stop inventing new rockets and just work on the spaceships and the asteroid bases. We're good at spaceships, and haven't tried for the asteroids yet.

I know that there are those who think we should have our own manned program for national prestige. I feel for them. I'd like to have one too. But I want us to fly more missions and more spacecraft far more than I want to waste US time and money in developing new rockets for that purpose. Ramp up the Russian production line for the manned flights.

Please build or buy something this time that you can fly a lot, or let someone else have the job.

... for the amount they want to design and field the Stick and the Longfellow, they could buy 60 Delta IVH flights, 150 Atlas V flights, or nearly 540 (!) Falcon IX flights (if those become available). How on earth is NASA going to be cheaper, unless you ignore the $15B development cost and the $3B/year fixed costs?

Google and NASA have teamed up. At one level I figure this is a PR compatible way for NASA to get rid of some excess space.

At a second level I've been remembering Saturn V (from the official histories, I wasn't even born before the vital design decisions had been made) and thinking about what some in the community call "the Stick". Maybe I'll have time to write that up... but the key observation:

For 5B dollars NASA proposes to develop a new manned vehicle for a shuttle replacement.

The Russians are selling manned flights to all comers for 60 million dollars each, or at 20 mil a head. (at, so far as anyone can tell, a profit). America could buy 5 3-man flights a year and we could keep flying, every year, even through the standdown period of 2010-2014.

And that's without ever touching the principal!

The frequency of flights (basically doubling the current pace) would lead to a natural rescue mode - with a monthly rocket on the pad.

The biggest problem with finishing the station and having that use rate is we have yet to get the biggest parts up there, and at the moment - it's safe to fly a shuttle up - if, not necessarily, down, again.

I most ferverently hope that someone from google goes down to whatever Marshall Center subbasement the Saturn V plans are stored in, scans the microfiche, and puts them on the web.

The more educated the debate is the better.  ¶ 5:39 PM 0 comments

Brian Clapper has a new blog: From The Macabre world of Disney:

I wasn't really surprised to see Disney Princess-branded Polly Pocket knock-offs suddenly appear in various stores. The Disney Princess dolls are similar to the "real thing," but the Disney designers had a few extra kinks to work out...

Read on Brian's blog for more on those "Kinks".

There's going to be a whole generation of warped children coming out of this. Forget video games. Dolls are the real problem!  ¶ 10:46 AM 3 comments

Top news of the day: The long repressed geek character of "AJ" on userfriendly has finally confessed his true feelings and got kissed... It took repeated abuse from a "shady lady" in a video game for AJ to get this point, but perhaps there's hope for AJ.

Oh, man, this is end - the day when Tux can't go around naked anymore and has to wear a suit! The power tie, in particular, gets under my skin.  ¶ 8:03 AM 3 comments