Refocusing the space program on getting resources from space...

Seeing all the publicity and news coverage around Mars approaching within 34 million miles... and to also know that Saturday, 37655 Illapa passed within 2.13 million miles, pains me. Why? A NEA (Near Earth Asteroid) like 37655 Illapa passes close by Earth every week. Nearly every day, an asteroid passes Earth closer than Mars on orbits called "Apollo" or "Aten" - orbits that are off-center from the sun. Each rock on these orbits travels in as far in as Venus, and as far out as Jupiter, and crosses our (Earth's) orbit every few years.

700+ Apollo/Aten asteroids are more than 1 km in diameter, and (est) mass over 2 billion tons. Each contains more oxygen, metals, and raw materials than we can, (or will ever!), launch from Earth. Hauling 2 billion tons of mass to earth orbit via the shuttle would take over 6 million shuttle launches! That's what pains me, the opportunities missed, every week. We could be making use of these asteroids instead of blowing money on Mars. A single small NEA, like 1999 OS, passing by Nov 11th, 2003, could supply much of our space needs for years.

There have been calls, in Congress and elsewhere, to permanently ground the shuttle fleet following an independent federal investigation that is expected to deliver a report blistering in its criticisms of NASA.

That would mean abandoning the $95 billion station project as well, since it depends on shuttles for construction and remains more than a year away from what NASA calls "core complete," the minimal assembly needed to conduct viable, long-term science.

[...] Without shuttles visiting the station on a regular basis, there is not enough water and oxygen to support a full crew, and scientific research will largely be limited to repeating experiments already aboard the station.
We struggle now to find ways to keep two astronauts in the space station supplied with food and oxygen, after spending 95 billion dollars to put them there.

Over a billion dollars was just spent on various probes to Mars. And I sit here, in just head-scratching disbelief, at our global fixation on visiting planets - when we could refocus a few billions of our space budget on first: acquiring the resources already in an apollo/aten orbit, second: on getting manufacturing capability there. If we accompish these two things - and then focus on exploring the solar system - the rewards are almost unimaginable. No more piddly 50kg probes, for example... J

Let's talk about a (theoretical) 1km wide asteroid. Forget the oxygen those space-farers need for a second. There's only a few hundred million tons of that available in that rock, I'd like to think of getting oxygen via an asteroid as a solved problem... but oxygen itself isn't worth much in earthbound terms, there seems to be plenty of it to go round around down here.

There's 30 million tons of nickel, 1.5 million tons of metal cobalt and 7,500 tons of platinum. The platinum alone would have a value of more than $150 billion. The nickel, at today's prices, 240 billion. (or 2 trillion - I may have slipped a decimal point) That's the value here on earth. Lifting that much mass to space would costs umpteen quadrillions more, something that we could never afford, but there it is, passing by, every week, if we could just summon the motivation and the international resolve to go and get one asteroid.

Telling a venture capitalist that they can make billions marketing some new gadget works - telling him/her that you can make multiple trillions gets you a blank stare and a quick escort to the door. And while mega millionaires like John Carmack and Jeff Bezos are focused on getting to earth orbit, few are focused on getting resources to orbit from space. We can already get to LEO, via multiple rocket designs like the shuttle, Atlas, or Energia, launched from America, China, Russia, Europe, Japan, or India, even from an innovative platform like Sea Launch - it's what we can do when we get there that's the real problem. The answer - damn little. Why? Not enough resources when we get there. But: look at the chart of NEAs on the left. There's gold in them thar hills.

For all I know, the average citizen of our world believes in hyperspace, that somehow we can keep using up our resources at a malthusian rate and yet never invoke malthus. That meat comes from the supermarket, oil from an infinite supply of dinasours, energy from quantum flux capacitors... For all I know most people stopped learning about space in 1972 - and think that there are at best a few hundred asteroids, all in the narrow "missing planet" belt between Mars and Jupiter. The reality is that there are millions in the belt, and thousands much closer than mars, passing close to our own moon, all waiting to be explored. We didn't know this at the time of the moon shot.

We've discovered thousands of NEAs since 1997.

After 40 years it still seems the basics of space travel remain mis-understood. We needed the mighty Saturn V rocket to get to the moon, and only the tiny Lunar module to return. Why? Gravity is a very weak force. It only takes 5% of the energy required to leave Earth to leave the moon. Asteroids weigh next to nothing, you can get off of one, bearing an enormous payload of semi-refined materials, merely by applying a spring. No complicated rockets required, but you can use them if you want. You still need (relative) velocity to intercept a NEO, and velocity to then return to earth, but the beauty of asteroid travel is that you don't need to carry all your fuel with you - you can acquire it when you land.

2 billion tons (or more) from a big one. Even using low-impulse ion engines and ground up rock for propulsion, you can then lift off and return.

Sure, with NEAR, we landed on Eros, but we far more cheaply and easily can visit the passing near earth asteroids - one plan, for a flyby of Toutatis could have cost less than 25 million dollars. (Also see - "endeavour". Numerous other plans exist, precious few are funded.

I don't want to redirect a whole asteroid to earth, (shades of the movie Armageddon), just (relatively small), easy to digest chunks, each larger than what a shuttle could ever launch. It's far more feasible, cheaper, and safer, to establish a low-tech mining operation, and just push what we need towards earth orbit. If misdirected, any given chunk would burn up harmlessly in earth's atmosphere.

Every week, I think of the NEAs, see them discussed on various newsgroups and websites, and visualize them rotating in silence, mute reminders of our own impotence, and our lack of vision. Maybe it's the current decade+ long planning horizon for space missions or the vested interests all trying to preserve a chunk of the budget pie. The only thing that comforts me is that we keep discovering more NEAs, every day, each with a more solid orbital plot. Although we lose an opportunity every day - these rocks don't go away, like comets, but cross our orbit every 2-6 years. Someday, we'll get to one, and use it.

Asteroid mining is a springboard, a real springboard, to truly exploring the solar system. It's a way to put purpose into both the manned and unnmanned space program. As a national investment, it pays off, maybe in less than a 20 years. As a trip for humans - how'd you like to travel the solar system for a few years? Sounds like fun, no?

Download celestia and wander about, or (even better!) plot the orbits of the interesting asteroids forward or backward using this browser based java tool, watch any of the known rocks pass achingly close by and maybe you too, will wonder, as I do, why we aren't focused on getting what we need from space?


(sorry, some are out of date) 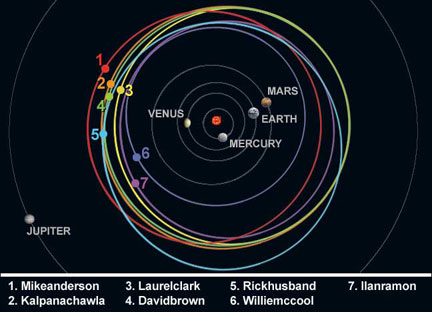 You may think of asteroids now, and still think "so what?". You may think that exploring space, or mining it, or visiting Mars serves no purpose. You'd rather go out for a beer than visit another planet. You might think that there aren't mysteries to be discovered on each of these unnamed - only numbered - worlds. Well... you're not alone in that. In fact, you're probably in the majority.

But - try to remember that there are still those that dream, or have dreamed, of getting humans into space. People that believe so hard in the potential of space travel that they are willing to pay any price for a once in a lifetime visit.

Here's seven asteroids in orbit whose names you might want to remember.

Resume,Songs, My new blog, NeX-6, My facebook page
Orgs I like
The EFF - keeping free speech in the world
Musical stuff I like
Jeff, Rick, Ardour, Jack
Prior Rants - Moon: 1. Meteors: 0. Man: 38 Taking a political quiz Just a couple hundred million folks, sitting aroun... Book publishers at LinuxWorld... and VOIP Live from LinuxWorld - w/Jim Gettys The inner workings of the internet mind Four for today Netizens rebel against direct marketing Kite shot down over Ashdod Exploring Punditry
Best of the blog:
Uncle Bill's Helicopter - A speech I gave to ITT Tech - Chicken soup for engineers
Beating the Brand - A pathological exploration of how branding makes it hard to think straight
Inside the Internet Mind - trying to map the weather within the global supercomputer that consists of humans and google
Sex In Politics - If politicians spent more time pounding the flesh rather than pressing it, it would be a better world
Getting resources from space - An alternative to blowing money on mars using NEAs.
On the Columbia - Why I care about space
Authors I like:
Doc Searls
Where's Cherie?
UrbanAgora
Jerry Pournelle
The Cubic Dog
Evan Hunt
The Bay Area is talking
Brizzled
Zimnoiac Emanations
Eric Raymond
Unlocking The Air
Bob Mage
BroadBand & Me
SpaceCraft
Selenian Boondocks
My Pencil
Transterrestial Musings
Bear Waller Hollar
Callahans